Three Eras of Endowment Performance Between 1974 and 2019

Hammond (2020) provides the most comprehensive review to date of the long-term performance of educational endowment funds. For the 58-year period (fiscal years 1962-2019), for example, the average endowment fund earned 8.1% per year, net of fees. A 60/40 passive benchmark returned 9.1% for the same period, meaning the composite underperformed by 1.0% per year.[1]

Ennis (2020) reported that public pension funds and large endowment funds underperformed passive investment in the years following the Global Financial Crisis (GFC) of 2008 by 1.0% and 1.6% per year, respectively. That article demonstrated that alternative investments have ceased to be the putative diversifiers they were thought to be and have become a serious drag on institutional performance. Ennis (2020a) examined the performance of endowment funds during the post-GFC period in greater depth. It found underperformance across cohorts of fund size and significant underperformance in a cross-sectional analysis of large individual endowment funds. It identified a value tilt to be a contributor to underperformance of smaller funds, in particular, and allocations to alternative investments to be an even more conspicuous source of underperformance across the board. For the present study, we compiled two series of fiscal year annual returns back to 1974. One is for small endowments and the other for large ones. Annual return series enables us to perform risk-adjusted performance analysis over a period of more than four decades, something that has not been done previously.

We obtained fiscal year annual returns for educational endowment funds from the Public NTSE Tables[2] and archival records[3] of Nacubo. Returns are self-reported and are represented, without verification by Nacubo, to be net of investment expenses. Nacubo reports statistics for seven cohorts of endowments based on fund size. Currently, $1 billion is the cut-off for funds grouped in the cohort of the largest funds. The cohort of the smallest funds comprises those with $25 million or less. We fashioned composite return histories for the two groups of funds. Within each group, fund returns are equal-weighted. In the discussion that follows, we refer to one composite as “Large” and the other as “Small.” The earliest returns available as annual figures are for the June 30, 1974, fiscal year. Other return figures over multi-year periods can be found back to 1962, but those records do not permit the derivation of annual returns. Accordingly, we have 46 fiscal-year annual returns for analytical purposes.

We compute risk-adjusted returns for Large and Small over three time periods. As in our prior papers, we use returns-based style analysis to establish portfolio benchmarks, using the quadratic programming technique originated by Sharpe (1988, 1992). The technique enables the analyst to determine which index returns best explain, statistically, the risk-return characteristics of a portfolio, or a composite of them as in the present case. We use three indexes in the benchmarking process. One is for U.S. stocks, one is for non-U.S. stocks and one is for investment-grade U.S. bonds.[4] We refer to the fiscal year annual return difference between composite and benchmark as excess return, which is the measure of merit employed here.

The returns of Large funds form three distinct eras of endowment management, which we identify as follows:

Stocks and Bonds. During the first era, 1974-1993, Large endowments averaged about 60% in common stock and 40% in high-quality bonds. In that era, equity investments were predominantly domestic common stock, and bonds were strictly investment grade. Interest in alternative investments — private market investments and hedge funds — remained incipient through most of the 1980s.

The Golden Age. By 1994, however, the Large cohort was allocating 18% to alternatives. That percentage rose to 54% by 2008 and to 58% in 2019. (See Exhibit 1.) Meanwhile, an unseen phenomenon began playing out during the Golden Age. The alternative markets themselves began evolving dramatically. The impetus was the flood of money that poured into private markets and hedge funds in that era and the one that followed. For example, hedge fund assets under management increased 27-fold between 1997 and 2018. Private equity assets under management increased 37-fold between 1994 and 2019.[5] As a result, pricing in those markets became better aligned with public-market pricing, and those alternative markets became more efficient. (See Ennis, 2020, for a fuller discussion of the evolution of alternative investment markets over two decades.)

Post-GFC. During the third and final era, the returns of the Large endowment composite, notwithstanding its more-than-50% allocation to alternative investments, came to be explained by stock and bond indexes alone, for all intents and purposes. Exhibit 2 demonstrates this. It depicts the regression of Large endowment returns on those of a benchmark comprising global stocks and domestic bonds alone.[6] Notably, 99% of the variance of the Large endowment composite’s returns is explained by stocks and bond indexes only. Alts had ceased to have a diversification-like influence. 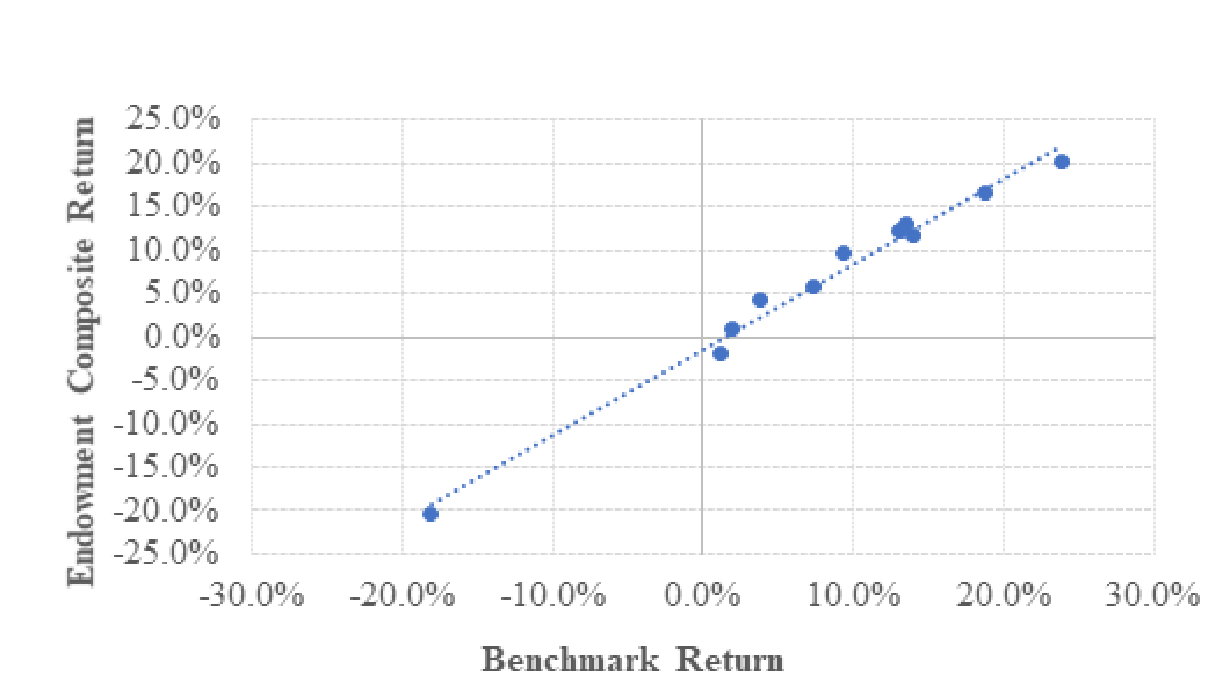 Exhibit 3 presents annual (by fiscal year) excess returns for Large endowments over the 46 years under study. During the Stock-and-Bond Era, the Large cohort composite produced an average annual excess return of -0.8%, which was the approximate margin of investment expense, including transaction costs, in that era. The extraordinary performance of Large endowments during the Golden Age — with an average excess return of 410 bps a year for 15 years — was due primarily of the exceptional performance of alternative investments. We know this because the excess returns shown in Exhibit 3 are calculated after taking account of the returns of stocks and bonds. Exhibit 4, which shows the excess return of alts before and after the GFC, reinforces the observation about the important role of alts in the second era. Exhibit 4, also underscores the underperformance of key alternative assets beginning in 2009, and in so doing introduces the third and final era. In the Post-GFC era, the composite underperformed the benchmark by the approximate margin of cost of 1.6%. In this era, investors were earning returns on their alternative assets commensurate with the underlying public market beta of those assets, while incurring costs of 2-4% of asset value for the privilege of laying claim to them.  Alternatives ceased to be sources of tremendous value-added and became a deadweight drag on performance.[7] Exhibit 5 provides performance statistics for the three eras.

Before and After the GFC 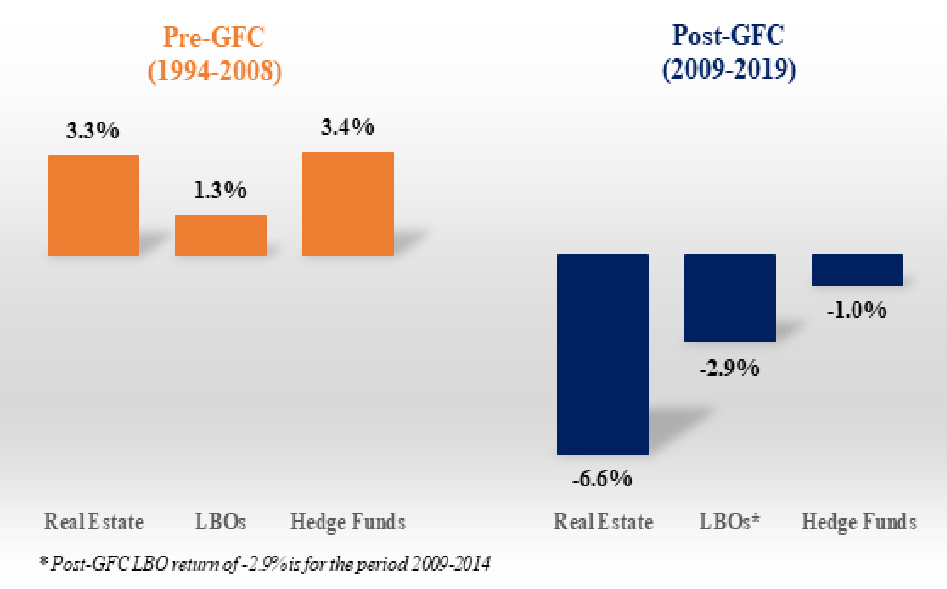 Endowment fund management, particularly that of large educational endowments, has been the subject of much discussion for nearly two decades. The so-called Yale Model has ardent supporters, to be sure; and there are plenty of skeptics about whether the approach can deliver superior results in the years ahead. Be that as it may, the average annual excess return for the full 46-year period is +0.6%. This means that the Large funds, collectively, earned compensation for risk, recouped their investment expenses and got some legitimate alpha, to boot.

Exhibit 6 shows the fiscal-year annual excess returns of the Small endowment cohort over the 46 years of the study. The simple average for 46 years is -1.2% per year. The Small cohort outperformed by a percentage point or more in just 3 of the 46 years. Exhibit 7 provides summary statistics by era. Small endowments underperformed passive investment even during the Golden Age, albeit by a smaller margin that in the other two eras. Even today, Nacubo’s Small cohort has an average of less than 10% in alternative investments, about half of which is hedge funds. The Small fund story, in other words, is largely one of the performance of the stock and bond managers of these very small institutional investors.[8] For nearly half a century, small endowments have been contributing more than 1% of their assets annually to the investment management and brokerage industries without benefit. Lacking significant resources for astute endowment management, the smallest institutions should drop active management altogether and avail themselves of passive alternatives.

In two recent papers[9], we made the following observations:

All eyes remain on the large endowment funds. They appear to be at a crossroads. For the past 11 years, their heavy reliance on alts — currently nearly 60% of assets — has been a major drag on performance. The average number of managers for endowments with assets over $1 billion in 2019 was 108, substantially more than the average of 18 in 1994, when the Golden Age began.[10] With so many managers nowadays, certainly there are a lot of offsetting active bets (deadweight) in the mix. If endowment managers stand pat, they risk suffering from the economically inefficient diversification that plagues public pension funds. Is there reason to believe that alternative assets will spring back to life as generators of alpha? What might bring this about? Alternatively, are endowment managers capable of a different kind of bold action going forward? If so, what might that be?

[5] Hedge fund assets under management in 1997 totaled approximately $118 billion. The figure grew twenty-seven-fold to $3.2 trillion in 2018 with much of the influx occurring in a handful of years leading up to the Great Financial Crisis. Private equity assets under management of $100 billion in 1994 grew thirty-seven-fold to $3.7 trillion in 2019. (Sources: HFR (2019); Preqin 2019 Global Report; Federal Reserve Bank of Dallas, December 1995.)

[7] Deadweight, or deadweight diversification, arises when multiple active investment managers are employed and proceed to make offsetting active bets. The investor is left without an active exposure but pays a fee to both managers. Consequently, however an investor seeks to distribute its assets among passive investments and active managers, it is vital to avoid creating deadweight. Unfortunately, this is precisely what public pension funds and many endowment funds have done in the name of diversification, and, in large measure, this is what accounts for their underperformance when cost is taken into account.

[8] Ennis (2020a) made two findings related to the performance of smaller endowments. It found that approximately 0.5% per year of the underperformance reported for Small funds during the Post-GFC Era was attributable to an unprofitable value tilt. It also found that across all fund-size cohorts of less than $1 billion there exists a strongly inverse relationship between risk-adjusted return and the allocation to alternative investments, i.e., the more they had, the worse they did.

[10]  The recent figure is taken from the 2019 Nacubo Endowment Study. The earlier figure is based on what the author believes is a representative sample of what endowment managers reported in the 1994 Nacubo study.